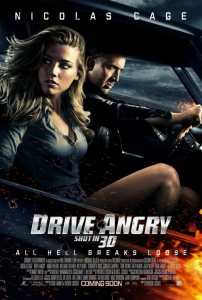 Drive Angry 3D is a fun idea that doesn’t nearly take full advantage of the premise it unleashes into the film.  I mean, the film opens with Nic Cage breaking out of Hell to hunt down the murderers of his daughter, a satanic cult hoping to bring Hell Fire to Earth, how does this movie not rock?

It constantly teeters on embracing the silly insanity that it presents to us but sadly never grabs hold and runs with it.  Part of the problem is Nic Cage isn’t nearly crazy enough in the picture.  Sure he is a serious dead father on a mission but give us a little something; and he oddly loosens up in the film’s final moments of the film.  Cage shows shades of cool and crazy but most of that craziness is left to the very cool William Fichtner.  There is an almost compelling mythology built up in this world of Satanism and insane action but again it never really grabs on and goes with it.

Adding Amber Heard to the mix is a sexy move to bring in some viewers looking for pretty ladies but her necessity to the plot is pointless till the films final scene.  That said, Heard has a lot of fun in the part and dives into the joke as much as you wish Cage would.  Director Patrick Lussier throws a lot of action set pieces at us, most working moderately well, but weak CGI really hurts the film when it rears its ugly head.  The worst instances of this are when the film adds a CG 3D element that couldn’t be convincing in the slightest.  Now, I am sure it isn’t supposed to be photo realistic but the film never fully embraces the silly over the top vibe that it should and has a couple of instances of affectively playing things seriously that make the proceedings quite confusing.  The film almost does a few beats dramatically well but then has crazy bat shit stuff going on in the next scene and you just don’t know how to feel.  It’s the film’s final scene that finally just gives itself over to the tone it should have from the start with some so awful its bad deaths you find yourself wishing for more.

The 3D in the film does look good, minus aforementioned effects, and the film serves as another good example of what quality 3D can look like when simply using a stereoscopic 3D camera.  If only we could have another major big budget tent pole film is released natively in 3D to really cement the medium.  But please, spend some cash on your 3D CGI!

Like I said, the acting is a bit disappointing on the Nicolas Cage front as I was expecting a far more fun and zany turn.  Heard and Fichtner both help make up in the fun department, and Billy Burke tries to out crazy the classic crazy Cage, but you can’t help but feel like there was a lot more craziness to be had.  Fichtner disappears for way to long at times and David Morse is barely even on screen in a role that gives him nothing to do.  Come on Lussier, use your talent.

In the end, Drive Angry 3D had a decent shot of being some good grindhouse fun but fails to capture the charm of even Rodriguez’s lesser genre effort, Machete.  Lussier should have taken a few notes or two on how to embrace the genre whole heartedly and not litter the film with merely moments of crazy fun.  Maybe it was a lack of budget (some of the bullet and action inserts are blatantly awful), maybe they just couldn’t get everything they wanted, but whatever it was they weren’t able to fully capitalize on their premise.  Oh well, had a bit of fun, just wish I had a lot more.

Drive Angry 3D is a D