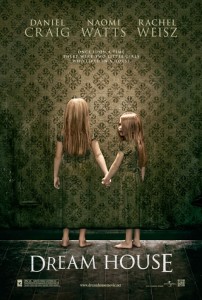 Dream House is an interesting idea, not a horror film, and has no idea what to do with itself; crumbling under a ridiculous, exposition heavy, third act twist that is almost laughable.  Poor and misleading marketing will make reactions to this film far worse then it deserves though, as there could have been something here.

This movie is next to impossible to discuss without spoilers so I will give you the best synopsis I can then it is spoilers the rest of the way. Deal? Ok.  The film revolves around a family, the Atenton’s, who have moved into their ideal home with the father, Will, now being able to stay at home as he works on his book deal.  An ex-editor, Will is excited to spend more time with his family and get to work on his book while his family settles into their new home.  As the days go by though, the family discovers some weird happenings surrounding them.  Footsteps in the lawn, mysterious watchers in the woods, and the discovery that the previous family owners were murdered; save the also wounded father who was accused of the crime but went insane and was placed in a mental facility.  Will fears that the recently discharged father, Peter Ward, is the man lingering around their house and he sets off on an investigation to get to the bottom of where Ward is and how to stop him.  Ok, spoilers from here on out.  You were warned.

Ok, my methods to try and not spoil the film are far more concerned than the marketers of the film, as they reveal the first act twist in the 30 second TV spots, but we discover that Ward is Atenton and that his family is a delusion of his loved ones he supposedly murdered.  The first act is well constructed and has a lot of moments that would play great a second time through if you weren’t spoiled of this particular twist.  I was even trying to actively not have the film spoiled and couldn’t avoid it and it is a shame because it is a solid little twist; especially for the first act.  The twist sets up the film to be an interesting character study of catharsis and potentially an engaging investigation if Ward turns out to be innocent.  The former works ok, the latter fails miserably.

Coming to terms with your illness by working through it with the delusions of your dead love ones, you apparently murdered at that, is a fucked up premise and one that isn’t nearly explored deep enough.  A couple of good scenes do get squeezed out of the premise, Dale watching his daughters die as he denies their existence the standout, but mostly the second act catharsis is used to let you know that Dale is innocent and he comes to peace with his family’s death.

It’s the third act where the wheels come flying off.  The neighbor and her relationship with her husband has been a barely touched on subplot in the film up till the final act but it becomes the crutch everything hinges on for the climax.  Apparently the evil ex of the Dales’ neighbor, Ann, hired the guy that murdered the Dales to actually kill Ann so he could collect on the insurance.  The hired hand went to the wrong house and decided, “I will just kill these people instead.”

So let’s get into the plot holes and silliness of the third act:

-you don’t give the guy the address or a picture of his mark?  They even show the ex giving the hit man directions, “third house on the left.”

-The ex, played by Marton Csokas, is so over the top evil it is no surprise he was behind this mess.  The acting is atrocious by the way.

-when the murderer is in the house, Dale’s wife is on the phone with him and we find out that Dale is standing outside calling them on his cell for no reason whatsoever; other then making sure he is out of the house so his family can be murdered and so the film can exist.

-I am pretty sure the murderer, played by Elias Koteas, is some random homeless guy.

-the ex tried to murder his wife 5 years ago, but they are still in the process of divorce?  What?

-the ADR’d exposition added in to try and make the third act convey any sort of sense doesn’t work, but you can just feel how desperate they are to try and cover their tracks as they don’t want anyone to see how lost they are.

-the Ex re-enlists the help of his failed hit man so they can put things right by putting Ann and Dale in the house with hopes of burning it down and making it look like Dale murdered her too in a relapse.  (And why did they let this guy out, even if there wasn’t enough evidence to hold him any longer, he clearly wasn’t stable; I don’t care if you try and validate it with a throw away line.)

-the Ex also shoots the hit man, disgustingly calling him a child killer in the process, from point blank range, but don’t worry the hit man will crawl over to the steps in time with a tub of gasoline to make sure the Ex burns in flames in the basement.

-Jim Sheridan flirts with ripping off Ghost, as the wife, Libby, runs through the basement hitting things to distract the Ex while Dale rescues Ann.  What they forgot is that they pretty clearly established that these aren’t ghosts Dale is seeing but figments of his imagination, or was her being able to manipulate things another twist I missed? Intriguing?

-Dale calmly works his way through the burning house to say goodbye to his dead/delusion family. Pretty sure he doesn’t get out of their after taking a couple minutes to kneel down in the flames.

This isn’t to say the rest of the film doesn’t have its quirks and oddities as well, but the third act is a giant clustercuss of a mess.

Daniel Craig, Rachel Weisz, and Naomi Watts all deliver average acting work at best, not that they are given a lot to work with, but Craig kept me interested for the first 2/3 at least.  This is not an actors’ showcase.

In the end, Dream House has an interesting idea it doesn’t nearly take full advantage of.  To make things worse, its third act comes out of nowhere and is terrible above that.  When your third act hinges on characters we barely see or care about for the first two you can’t expect good things and nothing good comes of it.  When viewed from a clean perspective, devoid of marketing, on cable down the line, the first two thirds of this movie will be considered enjoyable I imagine.  I am just as sure that it still won’t be able to overcome the terribleness of the third act I outlined above.  Skip it in theaters, but maybe give it a shot on cable, the third act is good for a laugh if anything.

Dream House is a D