Android and iOS Inhaling the Competition

Latest comScore results came in today, and it’s more of the same trend that’s showing a dying RIM practically handing over users left and right to both Android and iOS. 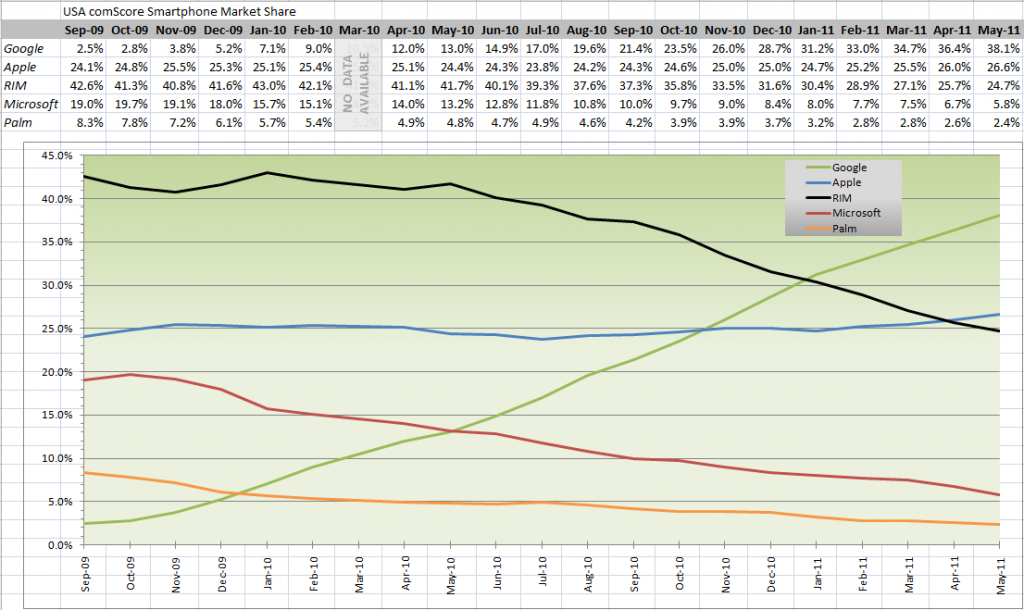 Android continues to maintain a strong rise in subscribers that has been in effect for the past 20 months. Apple’s iOS made history in April by overtaking RIM for the #2 Mobile OS in the United States with their highest ever recorded market share. The celebration can continue in Cupertino as they have again pulled in more subscribers in May to stand at a personal high of 26.6% of all smartphones in the country. Windows Phone and Palm webOS results are also continuing a trend: they have yet to gain subscribers in over a year, even though both companies having debuted major OS releases in that time frame.

RIM has been under fire lately… and not from the media either, but their own employees. Blackberry OS handsets have not been evolving as quickly as the competition, and many of RIM’s innovations such as BBM (iPhones now have iMessage) and mini-portrait QWERTY keyboards (much like the Motorola Droid Pro currently wears) are being utilized by the competition. The recent news from RIM surrounds an anonymous email from an employee high up in the company essentially exposing how and why Blackberry is tanking. This leads to a very “corporate” response letter which prompts even more employees to step forward backing up the original letter. It’s like watching a dysfunctional family of four piled into a beat-up station wagon on a road trip to see the World’s Largest Rocking Chair. No matter what they say to each other, your destination sucks. RIM needs to get themselves a sportscar and start looking at where Google and Apple take their families on vacation.