‘An American in Paris’ Shines Where It Excels, Drags Where It Doesn’t

The film An American In Paris, starring the brilliant Gene Kelly, begins with an exposition dump. It lasts one minute and thirty seconds to be exact. It tells us everything we need to know; the hero of our story is Jerry Mulligan, an ex-GI who stayed on in Paris to pursue his passion for art. From there we jump into some classic comedic beats, which set the tone for exactly what kind of film we are about to watch. Jump to the new musical, directed by CHRISTOPHER WHEELDON and adapted by ROB FISHER, and ten minutes into the play we have no idea what to expect. Without words we are schizophrenically tossed from scene to scene, in a jarring tour of what we watch become post-Nazi occupied France. Jerry (GAREN SCRIBNER) keeps running into the same girl (SARA ESTY), even saving her from a group of thugs. Yet she always gets away before he can uncover her identity. Quite a departure from the source material, I know. 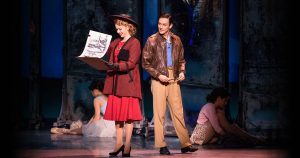 While I can’t complain about the set design or art direction – both are beautiful – the problem is with the story, starting with the pacing. The introduction lasts far too long, and again doesn’t really give a good idea about what the show is trying to be. And I don’t think the show knows the answer either. Is it a musical? It says so on the poster. But is it a ballet? Sure does seem so a lot of the time. And that isn’t saying anything negative about ballet; honestly it is the absolute best part of the show. The two leads of the show, Scribner (a soloist in the San Francisco Ballet) and Esty (a soloist in the Miami City Ballet), both are classically trained and breathtaking to behold. Watching their on-stage chemistry is magical, and I couldn’t take my eyes off them if I tried. But I digress, An American In Paris is a stage adaptation of a classic 1950s MGM musical and not Swan Lake.

The story is overly complicated when it doesn’t have to be. Where the film starts off with Jerry and Adam already being friends, we have to watch their platonic meet-cute unfold. Here we learn how Adam (ETAI BENSON) was also stationed in France during the war, and decided to stay after becoming injured during duty. In the bar where Adam occupies his time while drinking and composing depressing music, we sit through some post-WWII guilt humor in an attempt to get Jerry free rent upstairs. Why couldn’t we just get, “Adam Cook is my name. I’m a concert pianist. That’s a pretentious way of saying I’m unemployed at the moment.” Such a great introduction to the character, and another way to add levity to the story. Yet the character takes a much darker route to achieve laughs throughout this latest inception.

Next we are introduced to Henri (NICK SPANGLER) who instead of being an established star is an aspiring lounge singer, unbeknownst to his textile-tycoon parents (GAYTON SCOTT and DON NOBLE). This leads to another side story of constantly having to hide his love for performing from them. Meanwhile we learn of his love interest, who come to find out is the very same girl Jerry keeps running into. But also, the very same girl who later auditions for the ballet with the help from Adam – and lands the lead role in a show composed by him and designed by none other than Jerry. Do you see where this is going? Not to mention that the new show’s benefactress who is also Jerry’s pseudo love-interest Milo (EMILY FERRANTI). So much to do, and so little time – yet it feels like half of the show is dragged out by ballet filler. The choice to create such a disjointed style packed with so much story was not a wise one. 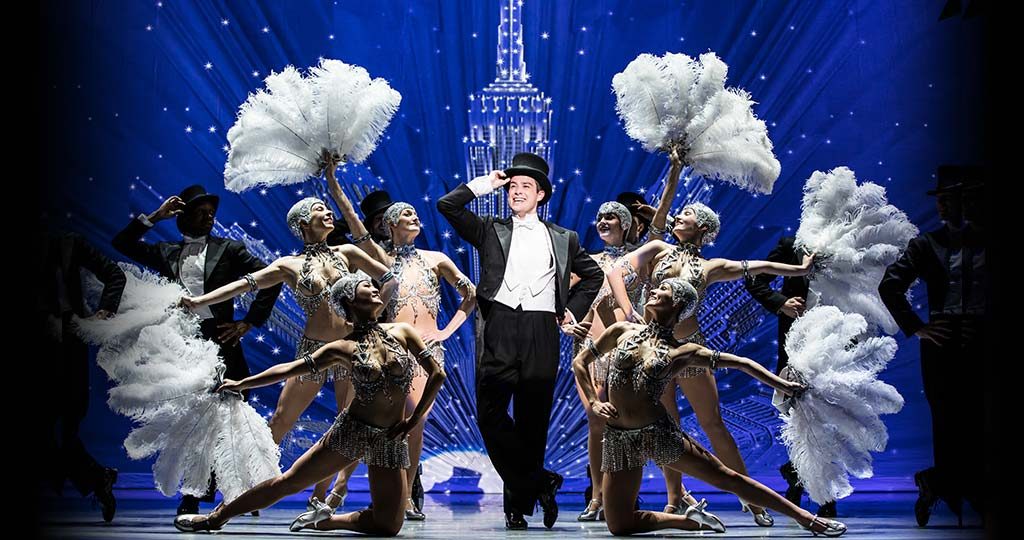 There are also some very strange beats in the show that simply don’t make sense. Throughout the show, the characters keep taking jabs at Henri – eluding to the fact that he may be gay. First of all it’s 2017, and in today’s climate the jokes come off more mean-spirited than funny. But this was the 1940s, so I’ll let that slide. Yet the main problem is that it is never a part of the plot. At no point in the show is Henri not convincingly attracted to and in love with Lise. His mother wonders “if his romantic interests extend beyond the fairer sex,” yet what cause does she have to say something like that? She doesn’t know he wants to be a song and dance man – which would be a far too easy joke in its own right. So the only cause we can see is that he is nervous about asking his girlfriend to marry him? During another scene he comments on a woman’s shoes – again, an easy joke. If his sexuality was actually a plot point, it would be forgivable – as we want to see Jerry with Lise. Henri not being interested in women would make that a lot easier. Instead Henri fights for her love throughout the show, and defends their relationship until the bitter end. 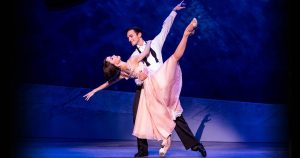 Part of the reason the show may seem so confused is director CHRISTOPHER WHEELDON first adapted the story for the New York City Ballet in 2005. I can’t help but to think when the idea for a stage show came to fruition, also directed by Wheeler, that he didn’t simply include many of his already choreographed ballet numbers. And ultimately that is where the problem lies, with not enough time spent on the overly complicated story and too much focus on ballet. The show is touted as a musical, and that is what people expect – especially when the source material is a beloved film that won six Academy Awards including best picture. You go to the ballet to see ballet, the opera to watch opera, and a musical to see song and dance. Each is wonderful for their own reasons, but you tend to know what you are getting going in.

The set design and costumes are marvelous, and the art direction is very well done. There is so much going on in the show, and the imagery does a fantastic job of leading the audience through the story. There is a lot of projection used, and it is utilized very effectively well to recreate post-war Paris. There were a couple of times where the scenery becomes very abstract, and isolated – much like many of the classic musical films. They really got the look and feel down, which was a lot of fun to see come to life in person.

It is easy to see that the creative team behind An American in Paris the musical has an immense love for ballet. The choreography set to Gershwin is breathtaking, and I would have loved to have seen it in full at the ballet. The dancers, extending beyond the leads to the entire cast is fantastic. Yet where the show really struggles is with the plot, and much of the overall writing. I wish it would have been kept simpler, and more fun like the film. Instead we get much of a show that doesn’t know what it wants to be, and an audience that questions if they wanted to be there.

An American in Paris plays the Fabulous Fox Theatre in St. Louis JANUARY 19 – 29, 2017! Tickets are $25 – $88, and the running time is 2 hours and 30 minutes with 1 intermission. Purchase tickets at Metrotix, or visit the Fabulous Fox website for more details.