Actress Amber Heard Comes Out as Lesbian at GLAAD Event 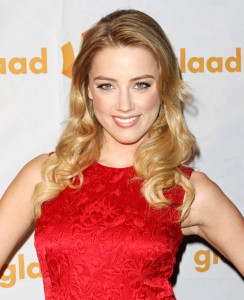 Yet another Hollywood crush of mine has gotten even further out of my reach. You see, as a male I entertain the thought that a beautiful woman like Amber Heard would be interested in me. The maleness of my brain immediately factors out that we are likely to never meet, and if we did I’m probably not anywhere near her on the number scale of either talent or attractiveness. Yet somehow, my male brain persists that I have a chance, that is until said actress comes out as a lesbian. The coming out acts as a game over for my brain that nothing else (barring death) could have.

Heard, who has recently appeared in films such as Zombieland, Pineapple Express and The Joneses, recently came out of the closet with her girlfriend at a GLAAD event.

You might be thinking, “So what?”, but Heard is an up and comer in Hollywood, whose next role is with Johnny Depp in The Rum Diary. It is important to note that doing this act 20 years ago might have doomed a young actresses career, but now could it possibly bolster it? I’ve enjoyed Heard’s performances, but haven’t thought much about her beyond her roles. Yesterday though I saw numerous articles about the actress that many people might know by sight, but not by name.

Good for her. Hopefully we’ll continue to see more of her. What do you think? Let us know in the comments!