Actor Sebastian Stan Talks About His Role as Bucky Barnes in “The First Avenger: Captain America” 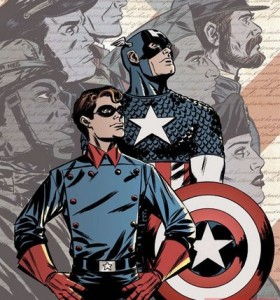 Actor Sebastian Stan has had a busy year appearing in Black Swan, Hot Tub Time Machine, and Gossip Girl.  But 2011 will be his biggest year yet.  He is set to star alongside Chris Evans in The First Avenger: Captain America.  Stan plays Bucky Barnes, Steve Rodger’s sidekick.  MTV recently talked with the star about the role.

Steve Rogers and Bucky are both orphans and kind of like brothers.  They kind of grow up together and look after each other. It’s a very human, relatable thing. And growing up in the Army is a very specific thing. There’s a certain way these guys carry themselves, there’s a certain etiquette, a certain body posture, the way that they interact. So I went back and read the comics and watched a lot of documentaries on World War II. “Band of Brothers” was very helpful.

There’s a lot of CGI stuff and working with a green screen.   I hadn’t done that too extensively before. That was very challenging, because you’re just there surrounded by green walls, but there’s explosions going off around you, so you have to factor that in and maintain that in your imagination.

Are you a fan of the Captain America comic?  What do you think about everything you have read so far about the film?  Let us know in the comments below.