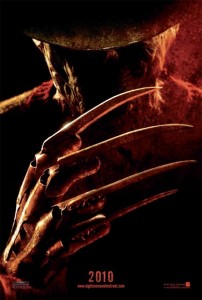 Platinum Dunes has been dedicated to introducing classic horror properties to an all new audience for years.  It began in 2003 with The Texas Chainsaw Massacre which I believe is their best film and is a lot better than the critics gave it credit for.  The studio has continued remaking classic after classic until last year with A Nightmare on Elm Street which did not receive glowing reviews.  So what does the studio have planned next?

Brad Fuller, one of the producer’s for the studio, recently took it to discuss what their plans are.  First, he talks about the future of Jason Vorhees.

I want to set the record straight on Freddy and Jason. First, let’s talk Jason. Shannon and Swift wrote a great script. We are ready to go, when New Line is ready. But as of yet, they are not ready.

I enjoyed the Friday the 13th remake.  But the first 25 minutes were by far the best part of the film.  I am down for another go.  But what about Freddy Krueger?  Are we going to see more of the knife glove?

As for Freddy, as far as I know, there isn’t even talk of writing another script. Rated R Horror movies, right now, don’t seem to generate interest from the studios. Everyday we want to hear from any studio that they want a horror movie, but it hasn’t happened. So right now we are working on a handful of films, including TMNT and OUIJA.

I hated the remake for A Nightmare on Elm Street so this is good news to me, but I hate to hear that studios are afraid of R rated horror.  I understand why, money, but gruesome deaths and disturbing imagery are needed for a good horror film.

As Fuller stated, Platinum Dunes has Teenage Mutant Ninja Turtles and Ouija on their plate, but they also have The Monster Squad, Christine, and The Butcherhouse Chronicles in development.

Which film did you enjoy more, A Nightmare on Elm Street or Friday the 13th?