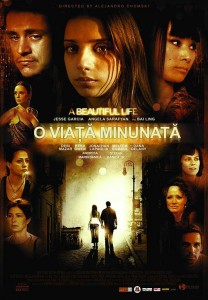 Maggie (Angela Sarafyan) is a teenage runaway fleeing her family; David (Jesse Garcia) is a teenage illegal immigrant in search of his. When their paths cross, both are alone in the City of Angels, a place where some come to dream and others to hide. A bus drops off Maggie in downtown Los Angeles late one night. She is unsure of where she’s going; only knowing that she’s not going back home. After wandering the dangerous streets for hours, she finally falls asleep in the one place that seems safe – the garbage dump behind a strip club. It’s there that she’s discovered by David, who works as a janitor at the club. He brings her in to let her use the bathroom and a kind stripper, Esther (Bai Ling), takes pity on Maggie, cleaning her up and begging David to take her home that night so she has a warm place to sleep. Maggie and David at first are suspicious of each other, but soon find they have more in common than they think and realize that their only chance of survival in the city may be if they stick together. In spite of themselves, they fall in love and together they struggle to find the courage to dream and hope again. Their blossoming love eventually lowers their defenses, allowing them to reveal their painful pasts to each other. Along the way they encounter hunger, desperation and danger. However, they also find kindness in a local librarian, Susan (Debi Mazar), and the family they never had with Esther. But when Maggie seeks out her mother’s (Dana Delany) help the truth catches up and she has to decide to face her past or keep running. “A Beautiful Life” reminds us that a life is not just the singular story of one person. Rather, it is the story of all the lives that intersect with our own and enrich it.