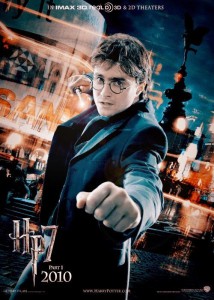 Hard to believe the wait is almost over for Part 1 of the conclusion to the Harry Potter series.  With each subsequent trailer I get more excited about the film, and a little bit more downtrodden as I have to wait almost another year before I can see the series wrap up completely. Although, I know when that day comes it will bring a bit of sadness as the series is officially over with no more books, and no more films to be made.

Let’s focus on the positives though, shall we? The new trailer gives us quite a few glimpses into scenes from the books, including the return of Dobby (finally!), the Snatchers, the Patronus of Kingsley Shacklebolt, and much more! WB’s marketing department really knows how to get fans pumped over the film! Who else can’t wait?