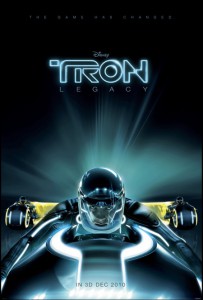 I’m of the opinion that movie studios should constantly strive to please me. You know, bring out a new trailer to entertain me every day? Sure, that might be asking a bit much, but I just get so hyped when I see new trailers for things like Tron Legacy. This film looks like everything I want it to be and more. The only thing I’m still a bit iffy on is the recreating of a younger Jeff Bridges, right now the CG seems terribly apparent, but it might be something that is fixed before the movie finally hits theaters in December.

I’m also liking that they are giving you the vibe of the story, without seeming to give away too much in the trailer. Too often I feel like I’m getting the complete story in the trailer (I’m looking at you Harry Potter trailers!), and it is refreshing to see one that gives me an overview without seemingly spoiling every aspect of the film.

Sam Flynn, the tech-savvy 27-year-old son of Kevin Flynn, looks into his father’s disappearance and finds himself pulled into the same world of fierce programs and gladiatorial games where his father has been living for 25 years. Along with Kevin’s loyal confidant, father and son embark on a life-and-death journey across a visually-stunning cyber universe that has become far more advanced and exceedingly dangerous.