“The Color Purple” is Playing at the Fabulous Fox in St. Louis – Theater Review 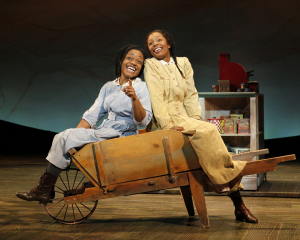 “The Color Purple” is a powerful musical, based on the Pulitzer Prize-winning novel by Alice Walker. The story follows the life of Celie, a woman who faces a life of hardships and adversity – but never forgets the power of faith and love.

The show is set in Georgia from 1909 to 1949. Celie is a 14 year old girl who couldn’t seem to be happier, considering her circumstances. Her father does nothing but yell at her and her sister, Nettie, forcing them to do hard work and never showing them any love. But the sisters love each other more than anything, and would do whatever it takes to protect one another. One day, while working at their father’s general store, a mean farm-owner referred to as “Mister” tries to take Nettie to be his wife. Although their father says Nettie is too young, Mister is persistent. But Celie wants her younger sister to finish school and become a teacher, so she goes with Mister without a fight.

Celie is played by Kenita R. Miller, who is quite the powerhouse. Her performance in this show is simply breathtaking, as we see her transform into the role with ease. Celie ages from 14 to 64 during the performance, and does so seamlessly in the hands of the talented actress. When she sings “I’m Here” after finding her confidence as a person, the brilliant power of her voice is truly unleashed. Her true character is finally able to break out with the help of Shug Avery, played by Angela Robinson. The actress is perfect in the role, and has the talent and looks to embrace it on-stage. With every movement she makes, she puts men of Georgia in a trance, and we see the power that she holds over them. Shug uses the power she has over them for good, as she does everything she can to help and protect Celie. The chemistry between the two actresses on-stage is touching, and the bond that they share makes for an emotional performance. 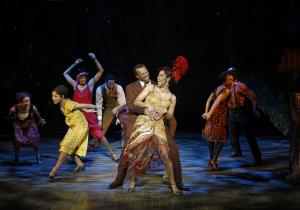 Rufus Bonds, Jr. takes on the role of Mister, the mean and heartless farm owner who takes Celie to be his wife. He plays this character with such a passion, that you can’t help but to dislike the character. Rufus completely envelopes the character, and makes it his own – as he goes from displaying his distaste for Celie, to showing is love for Shug Avery. He has to embrace a scale of emotions from high to low, and the actor does so with ease. The role of Celie’s beloved sister Nettie is taken on by LaToya London, who many will remember from Season 3 of American Idol alongside Jennifer Hudson and Fantasia Barrino. LaToya has a sweet and innocent presence on-stage, and the love that she has for her sister is apparent throughout her performance. As she reads aloud the letters that she has written to Celie, the emotion that she reciprocates is heartfelt and very touching.

One of the most memorable performances from the show is that of Felicia P. Fields, who plays the independent and strong-spirited Sofia. Fields takes on a role that seems to be larger than life, and does so as naturally as possible on-stage. At a time in history where women were expected to do chores and housework all day for their husbands, Sofia believes in quite the contrary. She isn’t afraid to speak her mind – and stand up to any man who gets in her way. Not only a talented actress, her vocal ability breaks through the roof during her big number “Hell No.” Her role in the show adds levity to the serious subject matter of the show, and is sure to keep audiences smiling from beginning to end.

The supporting cast of the show is comprised of a large list of talented actors and singers. There are so many great performances during the show, that wouldn’t be possible without the talented company. Mister’s son Harpo, played by Stu James, is a delightful character that struggles with becoming a man while fighting the influences of his father. James exudes such a likability on-stage, where most of his time is spent alongside Sofia. The three church ladies that narrate the story with song throughout the show do a fantastic job, as they interject humor and keep things moving.

Another part of the show that should not be missed is the magnificent set and costume design. The brilliant backdrops paint a colorful sky for much of the show, and the old-fashioned stage design and props accurately set each scene. The outfits worn during the performance are beautiful, and perfectly paint the picture of early 1900s Georgia. During the second half of the show, we are transported to Africa and see meticulously crafted tribal outfits. It is truly impressive how the audience is taken on the journey, right from the comfort of their seats.

“The Color Purple” is a wonderful show, with a powerful story that should not be missed. Full of emotion, the actors give outstanding performances that transfer their feelings to the audience. For those who have yet to seen the show, it will surely turn you into believers. And fans of the show will keep coming back.