The Oak Ridge Boys, Tanya Tucker and The Gatlin Brothers 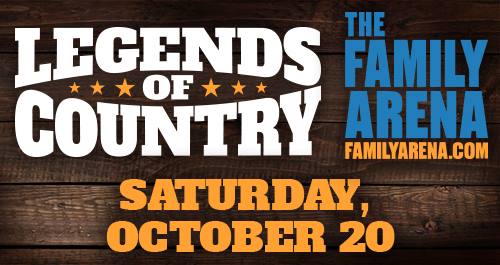 It’s a night of classics as The Family Arena presents The Legends of Country. Don’t miss an unforgettable experience as The Oak Ridge Boys, Tanya Tucker, and Larry Gatlin & The Gatlin Brothers take the stage to perform their iconic hits.

Theirs is one of the most distinctive and recognizable sounds in the music industry. The four-part harmonies and upbeat songs of The Oak Ridge Boys have spawned dozens of Country hits and a Number One Pop smash, earned them Grammy, Dove, CMA, and ACM awards and garnered a host of other industry and fan accolades. Every time they step before an audience, the Oaks bring four decades of charted singles, and 50 years of tradition, to a stage show widely acknowledged as among the most exciting anywhere. And each remains as enthusiastic about the process as they have ever been. Their string of hits includes the Country-Pop chart-topper Elvira, as well as Bobbie Sue, Dream On, Thank God For Kids, American Made, I Guess It Never Hurts To Hurt Sometimes, Fancy Free, Gonna Take A Lot Of River and many others. The group has scored 12 gold, three platinum, and one double platinum album—plus one double platinum single—and had more than a dozen national Number One singles and over 30 Top Ten hits.

In 1974, Rolling Stone ran a cover story on Tanya Tucker with the headline that said: “You’re Gonna Hear From Me.” Truer words have never been spoken. For four decades, her sultry voice and vivacious stage presence have helped to make her one of the most admired and respected female vocalists in the Country Music genre. Tanya’s reign includes 23 Top 40 albums and a string of 56 Top 40 singles, 10 of which reached the No. 1 spot on the Billboard charts. Along the way, she has provided some of the biggest country music hits of each decade, including, Delta Dawn, Blood Red, and Goin’ Down, Would you Lay with Me (In a Field of Stone), and Texas (When I Die” just to name a few. Tucker is also the recipient of numerous awards, including two CMAs, two ACMs, and three CMT awards.

Larry Gatlin & the Gatlin Brothers have been dazzling audiences for more than 60 years. By 1976, the Gatlin Brothers were in the fast lane, thanks to the chart-topping success of the Grammy Award-winning “Broken Lady.” The hits continued throughout the rest of the decade, including their signature song, All the Gold in California, soon to be followed by Houston (Means I’m One Day Closer to You). The number one hits continued throughout the next decade with I Don’t Wanna Cry, I Just Wish You Were Someone I Love, Statues Without Hearts, Love is Just a Game, and Night Time Magic. In addition to being inducted into the Grand Ole Opry in 1976, the trio was nominated for awards by the Country Music Association, the Academy of Country Music and the Music City News Awards, among others. “We won some of ‘em too,” says Larry.