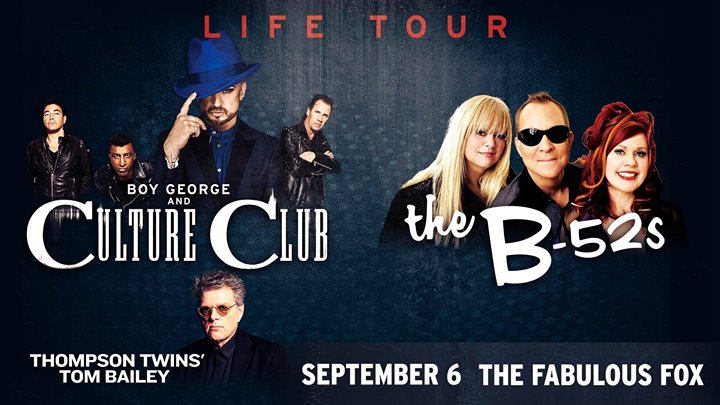 Grammy Award winning legends Boy George and Culture Club have revealed plans for a major 2018 U.S. headline tour with the multi-platinum selling band The B-52s. Announced today, The Life Tour: starring Boy George & Culture Club and The B-52s with special guest Thompson Twins’ Tom Bailey, will visit 40+ cities across the U.S. with a stop in St. Louis at the Fabulous Fox Theatre on Thursday, September 6.

“We put together an amazing show that is going to be filled with hits and fabulous memories, we know it will be hands down this summer’s best night out,” said Boy George.

About Boy George & Culture Club
After more than two decades and 150 million singles & records sold globally, 2018 marks a new era for Boy George and Culture Club, as they are currently working on their first new music in 20 years. The tour setlist will celebrate some of their biggest hits plus gives fans an advance listen to new songs.

Since their inception in 1981 Culture Club have sold more than 50 million albums and 100 million singles totaling 150 million worldwide, led by their classic hits, “Do You Really Want to Hurt Me,” “Karma Chameleon,” and “I’ll Tumble 4 Ya.” The group is fronted by British singer/songwriter Boy George, who is universally recognized as one of music’s iconic artists of all time. George was recently presented with the Ivor Novello lifetime achievement award in 2015 for his contribution to the music industry. As the first multi-racial band with an openly gay front man, Culture Club has set many records, including being the first band since The Beatles to have three Top Ten hits in America from a debut album. The band reunited in 2014 embarked on two worldwide sold-out tours in 2015 and 2016. Looking ahead, 2018 marks a new era for Boy George and Culture Club, as they are set to commence on a 45-date tour this summer and are currently working on new music. Roy Hay, Mikey Craig and Jon Moss make up the remaining original line up set to tour.

About the B-52s
It is well known that the B-52s are The World’s Greatest Party Band. And nearly 40 years and over 20 million albums into their career, there can be no doubt as to why they remain one of rock music’s most beloved and enduring bands. Any mystery concerning the band’s longevity and ongoing appeal is immediately solved when exposed to a B-52s concert experience. From groundbreaking songs like “Rock Lobster,” “Dance This Mess Around” and “Private Idaho,” to chart-topping hits like “Love Shack” and “Roam” and “Deadbeat Club,” to their thrilling reemergence on the pop scene with their 2008 CD Funplex, the B-52s’ unforgettable dance-rock tunes start a party every time their music begins.

Formed on an October night in 1976 following drinks at an Athens, GA, Chinese restaurant, the band played their first gig at a friend’s house on Valentine’s Day 1977. Naming themselves after Southern slang for exaggerated ‘bouffant’ hairdos, the newly-christened B-52s (Fred Schneider, Kate Pierson, Keith Strickland, Cindy Wilson and Ricky Wilson) began weekend road trips to New York City for gigs at CBGB’s and a handful of other venues. Before long, their thrift store aesthetic and genre-defying songs were the talk of the post-punk underground. A record deal soon followed and their self-titled debut disc, produced by Chris Blackwell, sold more than 500,000 copies on the strength of their first singles, the garage rock party classic “Rock Lobster,” and “52 Girls.” The B-52s began to attract fans far beyond the punk clubs of the Lower East Side — galvanizing the pop world with their ‘stream-of-consciousness’ approach to songwriting and outrageous performance. They had clearly tapped into a growing audience for new music that was much larger than anyone could have anticipated.

As they take their party-music revolution into the 21st century the B-52s show no signs of slowing down, serving up their own unique blend of music and showmanship to millions of fans around the world.

Much to TT fans delight, Bailey began writing contemporary songs again in 2016 and will be releasing a new album in 2018. The first track ‘Come So Far’ was released as a single in June 2016. Written from the perspective of a refugee in the current crisis the song is a moving portrayal of a refugee abandoning their home and moving in to the unknown. “I know where I’ve come from…don’t know where I go”. The single was released through Cooking Vinyl and all proceeds went to refugee charity Médicins Sans Frontières. A special numbered and signed 7” vinyl version of the single was also released through Pledge Music.

The music and videos of the Thompson Twins became a fixture on hit radio and music television throughout the world in the eighties. They were the soundtrack of our lives. Tom Bailey is at last performing those songs again that meant so much to so many.